The Guardian newspaper’s testament that ‘comment is free’ only holds so much water when you consider that we are already awash with so much ephemeral, ill-informed, and unsolicited opinion that it is eating up our valuable time and pushing it ‘into the red’.

This is possibly because there are more far too many commentators and not enough ‘do-ers’.

Nevertheless, I was encouraged to toss my thruppence-ha’penny worth of unsought assessment into the swirling soup of quasi-journalistic controversy. The topic I chose to write about was music, because I love it so very much. I also considered it to be a relatively ‘safe’ subject, but that was before I understood the depth of feeling that goes hand-in-glove with the creative imperative.

I wrote (I think) with serious intent balanced by earnest levity, but I also employed the leverage of dozens of years under headphones to offer the illusion of an informed intellect at work. The result was six years’ worth of music blogging, which I have now collated into A Creative Surge, a conceited ‘best of’ collection of my music writing. 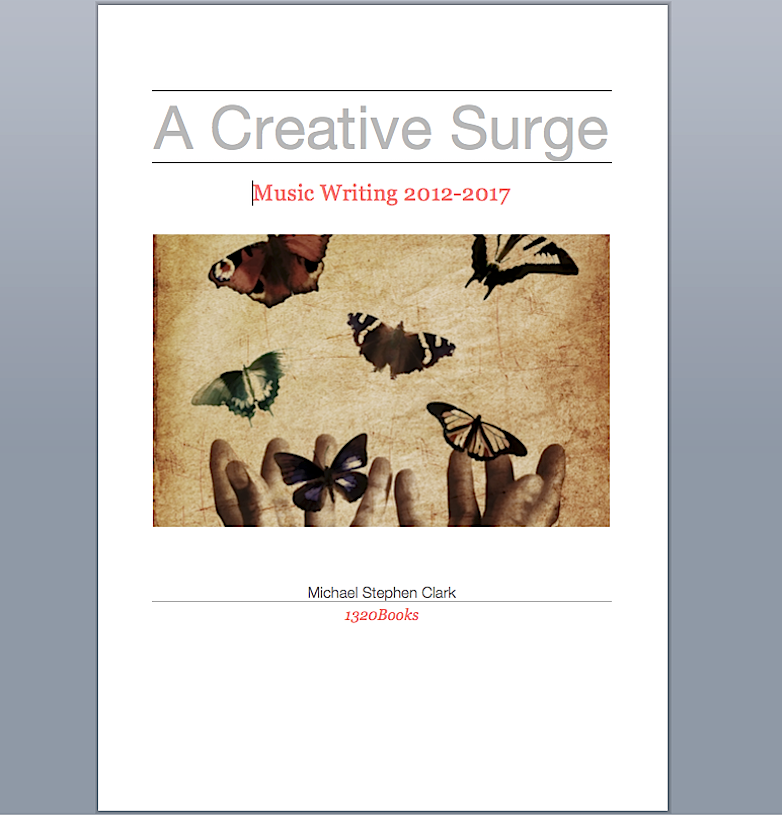 I offer it freely, and free of charge, to anyone with access to a decent eReader (Kindle, Nook or iPad) or reading app. (DOWNLOAD LINK HERE:)

What now follows is the introduction from the book, posted here as an explanatory note.

“I have to say that before I began writing about music, there was something strange about the creative process that I hadn’t noticed before. I began to see a rather hypnotic ebb and flow to it, with ideas circulating around the globe like oceanic currents. There are massive tidal movements too, capable of carrying a message far from its point of origin, only to crash and disperse upon the rocks of fickle public taste.

Every now and then, there is a collective surge of activity driven solely by the creative urge. We had one recently, and it felt at times that only a handful people were gathered along the shore to witness it.

Creative surges are a particular feature of popular music in all its various permutations. Some, like dreampop, shoegaze, and peak psychedelia, have come and gone, leaving only the faint echo of ‘revival’ behind them.

Others, like bebop and punk-rock (impossible bedfellows, I know) have been respectively spliced into the DNA of modern jazz and mainstream rock music. It’s anyone’s guess whether a creative surge will lead to riches beyond avarice or, more likely, take you down a one-way, dead-end street.

Musically speaking, I had been asleep throughout the first decade of the twenty-first century. I think the main reason for that was not an absence of fresh, new sounds, but a combination of two aggravating elements.

Firstly, my personal musical tin gods were all either dead or doomed to tedious repetition. I still love John Wesley Harding, but I wouldn’t thank you for a Dylan album now. Many other ‘rock icons’ should have been put out to grass years ago. Instead they’ve hung around on the pages of Q and Mojo for what has seemed like an eternity.

Enough already! ‘Where are all the bright young things?’, I thought.

The second factor that contributed to my disenchantment was my discovery, quite by chance, of the ‘off’ button on the wireless. Mainstream radio had become idiotic, and good music had become ‘niche’. I’m no fool. I can tell you right now that tuning in at 2.30 a.m. for the privilege of hearing new artists is clearly a punishment, not entertainment.

I retreated into a my shell, nostalgic for an age I’d never known, listening to CD’s in the car and regressing further and further back into the origins of popular song. Alongside the usual suspects like Ella, Nat and Frank, I also found myself singing along to the Irish tenor Josef Locke, and keeping flash company with Django and Stephane down at the Hot Club.

Then, I heard Samantha Whates singing her song ‘Village Kids’. It was ‘only’ a You Tube video, but the song and the performance made an immediate musical and emotional impact. It sounded like a song that owed very little to anything else, yet felt as familiar as a well-loved pair of woollen gloves.

It was Samantha’s close friendship with singer/songwriter Josienne Clarke that further signposted the existence of an extended community of music makers who were strongly connected and shared similar aims, aspirations and ambitions. I quickly recognised a resurgent ‘art of song’ and a devotion to melody of a kind that the mainstream music industry (and the ever-ligging media) had signally fail to understand.

These two ideas became the focus of my writing although, at first, scribbling about music seemed like an idle and indulgent occupation for a grown person. I needn’t have worried; not when leading ‘music journalists’ hadn’t noticed any of this, happily declaring, ‘there’s not much out there at the moment’.

I can’t imagine what a kick in the teeth remarks like that must be for the many artists, ensembles and collectives who put their hearts, their souls and their credit cards into the realisation of their work. This is the gifted generation who’ve had to work doubly hard to create music, and are still being punished for being born into a venal, digital age.

It certainly made me cross, so I picked up my pen and went to war.

There is, of course, more music out there now than anyone could listen to in the course of five lifetimes. Ideas continue to pour out of people because we’re compulsive that way. It can’t be helped.

I knew about halfway through my stint as a music commentator that I couldn’t keep it up. I haven’t the stamina of those at Fatea or Louder Than War, who are in it for the long haul. I admire them greatly but, hell, I don’t even like the internet that much.

I do, however, want to create a slightly more permanent record of my encounters with Millennial Music Makers. Websites are too ephemeral, hackable and dislikeable to be fit for purpose as archives or memoirs. There are too many broken links. A book is better but, since print is beyond my budget, we’ll just have to make do with digital.

The common threads among these stories are the shared characteristics of the music I covered (melody, harmony and history), and the clear-eyed conviction of the songsmiths and the music makers. They made their mark (and continue to do so) despite the prevalence of the independent, self-release business model, and not because of it.

I hope that the artists I feature here will revisit these collected essays, reviews and interviews sometime in the future and enjoy re-connecting with the people they once were. We all move on; that’s the way we are. Once the surge is spent, there is nothing else to do except watch and wait, and keep a weather eye out for the ch-ch-changes.